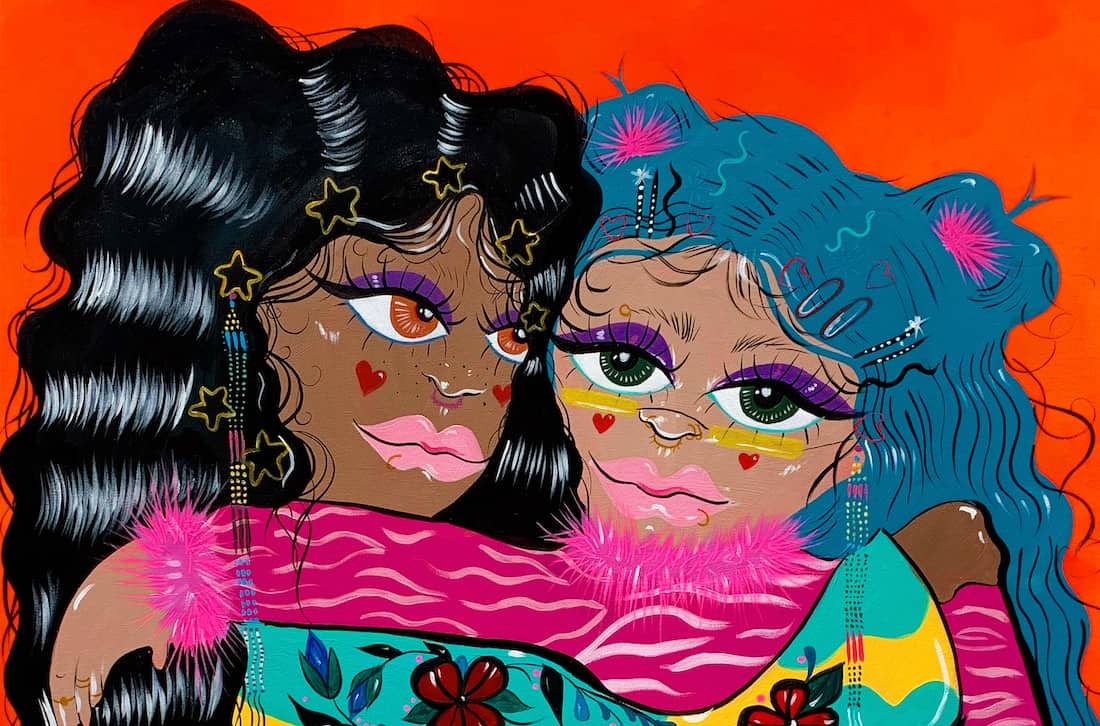 Indigenous nations and governments, workplaces and organizations, policy and political networks and families: this is a call to begin the work of implementing a Zaagi’diwin Inakinogewin (or “love law”).

Zaagi’diwin Inakinogewin emerges from a desire for our communities to affirm the value of freedom of expression and choice regarding gender identity, gender expression, and sexuality. These freedoms permit owning our bodily sovereignty and individual autonomy to live in the world. We realize our bodies are our own, and we deserve to live without the constraints of colonial enforcements of cisgender heteropatriarchy in all its forms.

Zaagi’diwin Inakinogewin, then, can help breathe life into this view of freedom.

The law can rise from an amalgamation of human rights-based terminology, human rights-based policy instruments, codes, and legislations from Indigenous communities, provincial and federal Canadian governments, and International Commissions that can, and should, be incorporated into all human resource policies and tools and used as a principle of relationality.

The call for Zaagi’diwin Inakinogewin offers some definitions, includes important context, key considerations on the framing and implementation of the law for communities and, finally, a list of urgent recommendations to propel the love law.

Defining Diversity In Gender and Sexual Identity and Expression

It is important to recognize that due to the imposition of colonialism, religion, cis-gender heteropatriarchal culture, and misogyny, many Indigenous peoples do not have access to the language of diversity in gender and sexuality. This includes words in Indigenous languages that culturally locate, describe, and define Indigenous gender identities, expressions and sexual identities. But in English, we can turn to the Ontario Human Rights Commission’s definitions of gender identity and gender expression, and sexual orientation.

Gender identity can exist on a spectrum and include many identities such as non-binary, gender non-conforming, a-gender, gender fluid, cis-gender, intersex, and more. Depending on that identity, gender expression can also take many forms and is often manifested in the use of specific pronouns. Put another way, a person’s choice of pronouns is a part of their gender expression. This might include using he/him, she/her, they/them pronouns, for example.

Two-Spirit (2S) is an Indigenous gender and sexuality term referring to the possession of both masculine and feminine energy. Two-Spirit could be defined as a combination of gender identity, gender expression, and sexuality that culturally locates Indigenous individuals with a blend of masculinity and femininity. As an identity, it affirms Indigenous communities’ connections to land, culture, language, and ways of being that are decolonial and anti-racist.

However, not all Indigenous individuals use Two-Spirit and choose to use English identifiers instead, maintaining their connection to land, culture, language, and Indigenous identity in other ways.

Individuals also use gender identities based in their own Indigenous language to locate themselves.

The diversity of these gender and sexual identities is included in the 2SLGBTQQIA acronym that we see adopted today.

For centuries, a dominant culture has forced the narrative that sex has determined gender identity, expression, and sexuality. In the Ontario Human Rights Code (OHRC), “sex” is not entirely defined, but they take the position that biological sex determines your gender. The use of sex as an identity-based factor increases discrimination, inequity, social stigma and exclusion, and violence against Two-Spirit, non-binary, and trans Indigenous peoples. It does so by using sex as an identity authentication factor to access all basic governmental and private services, such as housing, employment, banking, social assistance, health care, and more. For example, if an Indigenous trans person is seeking housing or banking, they can be discriminated against by service providers reading their sex as an identity-based factor. This can lead to being criminalized and accused of identity theft, fraud, or denied services entirely because of their sex not matching their gender identity or gender expression. This is cisgender heteropatriarchy, the dominant culture referenced above.

There are a few options for creating harm-reductive practices in defining diversity in gender. One would be to entirely remove sex as an identity-based factor to authenticate identity in order to access services. Another would be to utilize sex “x”, in addition to “m” and “f”, to be inclusive of all Two-spirit, non-binary, and trans Indigenous people. Both options could fit into the current regulatory scheme of governmental and private service provision as an interim measure. It would be interim while we wait for a full culture shift that pushes sex and gender out of identity-based factors and towards the safety and security of Two-Spirit, non-binary, and trans Indigenous peoples.

Despite existing and emergent definitions, Indigenous communities have always had diverse genders and sexualities. Yet, with the arrival of settlers and the emergence of colonization, a key goal of assimilation has been to unalive the diversity of Indigenous genders and sexualities. We are all aware of the colonial objectives of eradicating Indigenous cultures, knowledge, spirituality, languages, and ways of being. Today, we have tried to return to our original notions of sexuality, and there exists Indigenous policy and political calls for action that advocate for inclusion, awareness, safety, and security of Indigenous genders and sexualities. This includes the Missing and Murdered Indigenous Women and Girls 2SLGBTQQIA Calls For Justice and the Assembly of First Nation Resolution supporting the 2 Spirits In Motion advocacy network. There further exists Two-Spirit councils and ad hoc groups at the grass-roots level guiding the majority of the collective action. This work completed by Indigenous communities joins mainstream legal mechanisms and political actions around the world.

Beyond advocacy, there are also (limited) statutory and policy measures in the Canadian context. The Canadian Human Rights Act regulates protected identities from discriminatory practices and inclusively protects gender identity, gender expression, and sexuality. Conversely, the fundamental Canadian Charter of Rights and Freedoms does not ensure equality before and under the law and equal protection and benefit of law based on gender identity, gender expression, and sexuality.

It is a poignant and urgently needed addition to the Charter to include these identity factors to ensure the protection, safety, and security of Indigenous Two-Spirit, non-binary, and trans people.

The Department for Women and Gender Equality has been utilizing and developing a policy tool called Gender-Based Analysis Plus (GBA+). This tool provides some useful definitions and examples of discrimination against protected identities from an intersectional perspective. However, it falls short in considering the protection, safety, and security of Two-Spirit, non-binary, and trans Indigenous peoples. This failure is evidenced by refusing to recognize the deeply colonial intersections of racism, transphobia, and homophobia. It does not explicitly outline how transphobic and homophobic discriminatory actions are racist and are a result of colonization that continues to unalive Indigenous genders and sexualities.

Like the Canadian context, internationally there are positive developments that don’t go far enough. International instruments that contemplate human rights include the United Nations Declarations and Resolutions, and foremost among them, the Universal Declaration of Human Rights (UDHR) passed in the General Assembly in December 1948. The UDHR is a milestone document in the history of human rights: It fundamentally sets out human rights to be universally protected, has been translated into over 500 languages, and is broadly applicable. But similar to the failure to include gender identity, gender expression and sexuality in the Canadian Charter of Rights and Freedoms, the UDHR also fails to protect them.

Three-quarters of a century after its passage, the United Nations moved four Resolutions that examine human rights, sexual orientation, gender identity, and gender expression. The Resolutions do not call to update the UDHR to include gender identity, gender expression, and sexuality as protected identity grounds, but do offer some substance to work with on implementing an international context for protecting Two-Spirit, non-binary, and trans Indigenous peoples. In Resolution 32/2, the United Nations General Assembly “Strongly deplores acts of violence and discrimination, in all regions of the world, committed against individuals because of their sexual orientation or gender identity.” While this instrument is not legal or charted, it is an official expression of the opinion and will of the United Nations. It further mandates an Independent Expert on protection against violence and discrimination based on sexual orientation and gender identity. The most recent 2019 Resolution accepts the report of the Independent Expert and supports its continued mandate.

For the protection of Two-Spirit, non-binary, and trans Indigenous peoples, the United Nations General Assembly, in conjunction with the Independent Expert, must change the UDHR to include gender identity, gender expression, and sexuality as protected identity-based factors. This vision of culture shift, love of gender and sexuality diversity then becomes an indicator of our world’s overall wellbeing.

It recognizes our bodily sovereignty, personal autonomy, and jurisdiction over our bodies that supersedes colonial interferences. It honours our spirit and brings us joy and happiness in our daily lives through gender and sexuality expression and identity. At its core, love law protects Two-Spirit, non-binary, and trans Indigenous people from discrimination, inequality, and violence.

To ensure a framework of love law can be adopted by all, I have prepared some recommendations:

Given the context, whether community, government, or organizational, love law may differ from place to place and even in expression. But whatever shape the law takes, there are very clear requirements, which have been outlined here: an end to the discrimination of individuals and communities that express diversity in gender and sexuality; an end to the half-measures that only, ultimately, perpetuate the problem.

The translation of Inakinogewin in Anishinaabemowin has come to mean law, but it also can simply mean agreement. Let us all agree to begin the work of protecting Two-Spirit, non-binary, and trans Indigenous peoples. The Callers of Action: An Interview with Eva Jewell and Douglas Sinclair on Measuring Reconciliation